Code Switching- The term, as it relates to those of us that effortlessly dance on the balance beam across the dichotomy of what it means to be Black in America is not new, nor is it exclusive to the Black experience. There have been blog posts and articles that do a great job explaining the act. I’d like to open up the conversation and create a space to discuss how this year has created instances where the lines have blurred. 2015 has proven to be the year of the movement, and there have been plenty of times that being the only black face in the place has called on many of us to have to decide where we need to fall on the spectrum.

Disclaimer: I am making the assumption that many of us have at least a temporary Hotep persona that both inner- and overstands when it’s time to let the knowledge drip like raw-vegan, organic, cold-pressed carrot juice.

So picture this scene:
Day three of five of a major event that you’ve been helping plan for over a year. You find out, via Shea-Butter Twitter, that a peace rally is about to jump off right outside. Why? Because the tape from one of the various heinous acts of violence towards black men this year was released this morning and The People are more than aggravated… There’s you, a sea full of white people and others. The only other black person around has gone Full Corporate because they’re in the middle of conducting a service/training and they also haven’t heard the news. Everybody else is buzzing about what’s getting ready to take place. Who do you decide to be on this day? 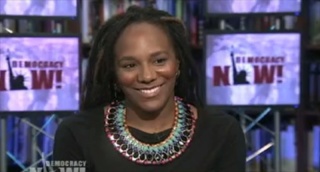 1. The Activist- You can take the bold approach and assert your stance on the matter in an eloquent and unwaivering tone without falling into a debate trap. Stand firm on what you believe and take a walk outside to march in solidarity. Don’t talk, just do it. You may get fired, but that’s the life you live when you’re not typing TPS reports and you’re ok with that.

2. The Hotep- Find the most vocal person in the room and work to tear apart their argument from it’s origin. Giving them just enough room to draw breath and no space to provide an opposing view until you have, at least in your mind, completely dismantled their reasoning and caused them to question their very existence in your King- or Queendom. You’ll get fired, but it won’t be until they’ve been able to build a six month case around all the times you showed up late because the healing session went too long, or when you had the whole office smelling like frankencense. They’ve been waiting on a moment like this to get the paperwork started on you. You however, overstand that this job is not your source, so you’re ok with that.  You even dipped extra incense and renewed your vendor’s license over the weekend just in case because you Stay Woke!

3. The Suit- The most uncomforatble place on Earth is being in a position of feeling like you have to explain your people when you don’t really know how it’s going to go yourself.  At bare minimum you have to reinforce the fact that you aren’t afraid or you run the risk of being stuck in an environment where it’s ok to be afraid of Black people attempting to exercise their rights to protest. You decide to go in confused as to what the fuss is about, and return with an appeal to common sense. “Hey would you go get a permit to start a riot?” *insert an uncomfortabe, acceptable negro chuckle*. Then immediately enlist a socially aware and open-minded co-worker to be your stand-in “other black employee” and release all that fake smile frustration in a remote corner of the building. As long as you chose the susbstiture wisely, you won’t get fired… but how long do you plan on living like this?

Full disclosure something like this happened to me and I chose to be The Suit. I still don’t know if that’s the right answer, but I do know it was the safe bet for me at the time. What would you do? Can keeping it real have it’s advantages or does it usually go wrong in these circumstances?

Let’s get the discussion going in the comments section, I’d like to hear which approach you’d choose and if you think my descriptions are valid/accurate.

Some Reference Articles if you’d like some explanation:
http://www.npr.org/sections/codeswitch/2013/04/08/176064688/how-code-switching-explains-the-world
http://www.economist.com/blogs/johnson/2013/04/code-switching

I write. From tips & tricks on natural hair, to rants about the social political state of the world around us. The full spectrum of all things that you can imagine in between. Don't worry, I keep it all separate. View all posts by marelle76